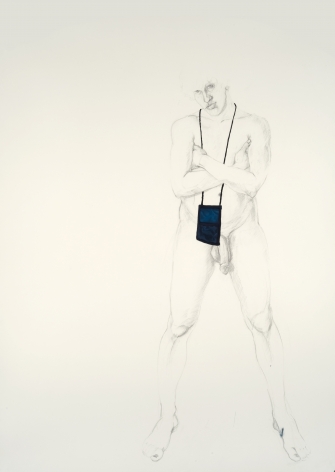 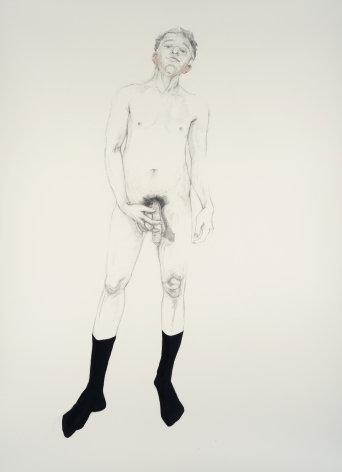 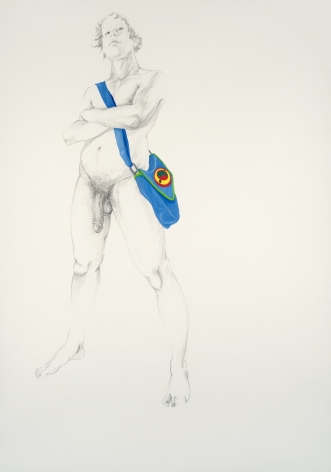 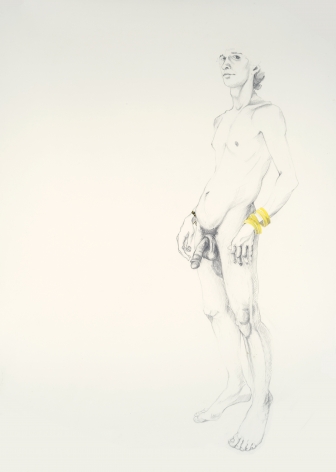 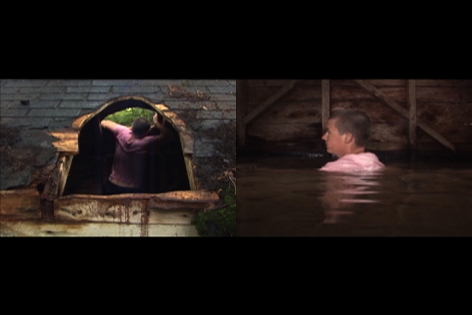 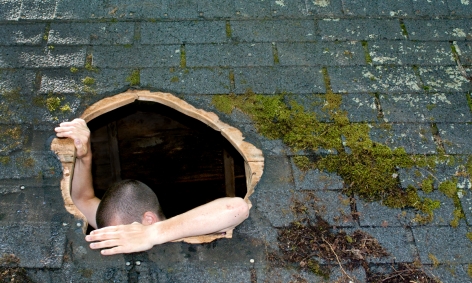 Zoë Charlton, best known for depicting sexualized bodies of black women, presents a new series of nude white male figures in her second solo exhibition with the gallery, Paladins and Tourists. The themes of these large-scale drawings were inspired by the artist’s interactions with young white male art models. Charlton observed, “It was interesting that some of the men made efforts to define themselves in relation to me as a black female artist. They seemed eager to align themselves with me by telling me about certain interests, like Reggae music, or about causes they support, like Water for Africa.” Charlton’s experiences led her to conceive of her subjects as modern day paladins, or knights - who, instead of going into battle, volunteer and donate money - and as tourists - who sample unfamiliar, exotic cultures.

Charlton adorned her bare, white male models with tokens of their social beliefs, or souvenirs of their cultural adventures. Rather than toting weapons and saddlebags, the “paladins” carry water bottles, and shoulder bags. The “tourists” wear passport pouches and African emblems. To symbolically enhance their male power, the artist posed the models in provocative stances and, in her depictions, increased the size of their sex organs. The theme of dominance interacts with that of exotic souvenir collecting to evoke historical traditions, including European colonization of foreign lands and the collecting culture of the Grand Tour. As these precedents reverberate in the predominance of Western paradigms in today’s culture industry, Charlton’s drawings suggest a cultural critique.

Charlton delves further into a personal examination of colonialism and exotic objectification in “Be Sarah” a new video animation about Sarah Baartman (a South African slave who, in the early 19th century, was exhibited for public entertainment in England and France as a specimen of curiosity known as the “Hottentot Venus”). In the video, Charlton reverses the focus from Baartman’s body to her consumer audience, re-imagining the way Baartman felt her difference as crowds of European spectators openly gawked at her on-stage.

Mia Feuer’s Stress Cone is a special *gogo art projects exhibition featuring a large, site-specific sculptural installation modeled on electrical transformer stations. Feuer stated that she drew conceptual inspiration for this work from Michelangelo’s depiction of matter receiving the spark of life in the Creation scene on the Sistine Chapel ceiling. By suspending a complex structure of muscular forms from the gallery’s ceiling, the artist created a disarming presence in the gallery that may feel to viewers both familiar and disorienting. Feuer punctuated her industrial imagery, combining protruding vertical beams and pressure tanks, that allude to biological generation, with hot-colored elements and electrical insulators that may trigger emotional associations. She further enlivened the massive structure by representing clusters of water-dwelling leaches that appear to cling to and spread over the electrical structure.

Mary Coble and Blithe Riley make their collaborative debut with the gallery as Coble/Riley Projects in their two-channel video Ascension/Immersion. On-site in the woods of Maine, the artist team transformed an abandoned decaying, spring house into a platform for performance by cutting two large holes in the roof, which allowed a sole performer (Coble) to enter the structure from above and then exit from below. We watch and listen as the protagonist repeatedly drops 5 feet into a pool of water inside the spring house, then climbs outside through the roof, to drop in the water yet again, with no explicit goal. The performer’s sequential actions of emergence and ascension are visible simultaneously on the split screen, creating a sense of dislocated time. The continuous unfolding of an unexplained ritual within the format of Ascension/Immersion generates an absorbing visual rhythm, while the ambiguity of the video’s imagery gives rise to various possible meanings that can attend the oscillation between internal and exterior states.

There will be an opening night reception, Saturday, March 19th from 6 to 8pm.
Artists in attendance. 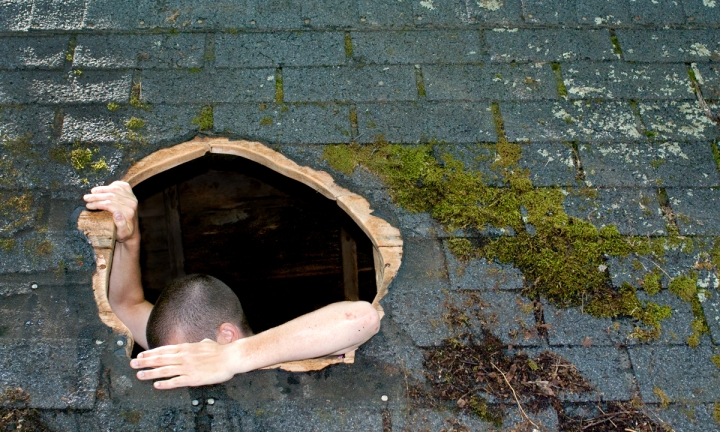 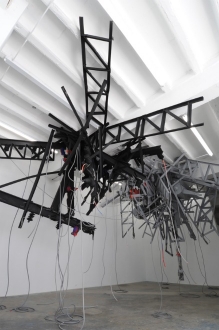 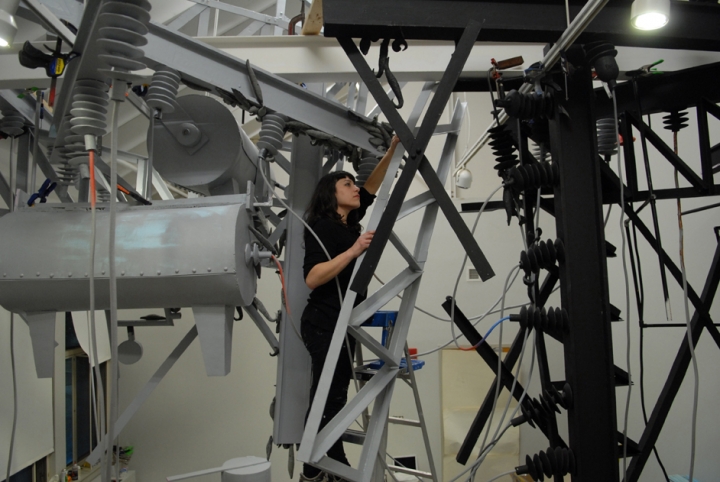