"MEHRING AS A YOUNG MAN WAS ONE OF THE MORE SPIRITED, INVENTIVE AND ALL-AROUND BETTER ABSTRACT PAINTERS OF HIS TIME, NOT ONLY IN WASHINGTON, BUT IN THE ENTIRE COUNTRY" - Ben Forgey, Washington Post art critic 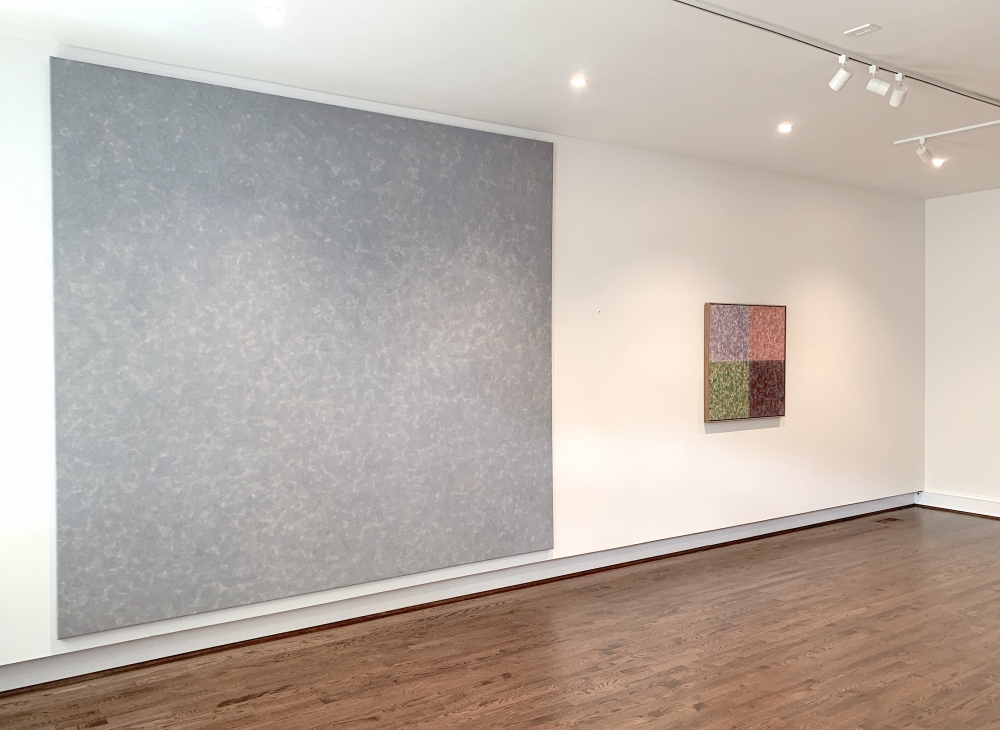 In 1958, building on the breakout success of his early lyrical abstractions, Mehring originated the technique of pouring paint and stippling with a brush that would characterize his first stage of mature work. These delicate field paintings, known as “Allovers,” reveal the artist’s mastery of both tonality and color, as is evident in “Untitled (Blue/Slate)” and “Untitled (Yellow Allover).”

Mehring explained how he used color to give rise to a new sense of space: "I want the surface of my paintings to breathe color so that I am able to look into the painting and penetrate it visually. He elaborated, "In action painting color was often reduced to allow movement to dominate. I have slowed movement so that color is primarily expressive. My work has become less and less linear for this reason, until the line is absent. I draw with dots using different sizes producing an inner expansion and contraction and pulsation of color. The dot of color has become the basic element of my painting." He reflected, "This may yet be the most important development in my work. In this manner the tangible is coupled with the intangible, the painting is finite and infinite and extended into the space around it." Whereas Mehring "slowed the movement" of his imagery, the fields he created are enlivened by the interplay of colors over bare canvas. As curator Mary Swift stated, "Although the end effect seems like one color, they are usually composed of layers and layers of color, making them very rich." 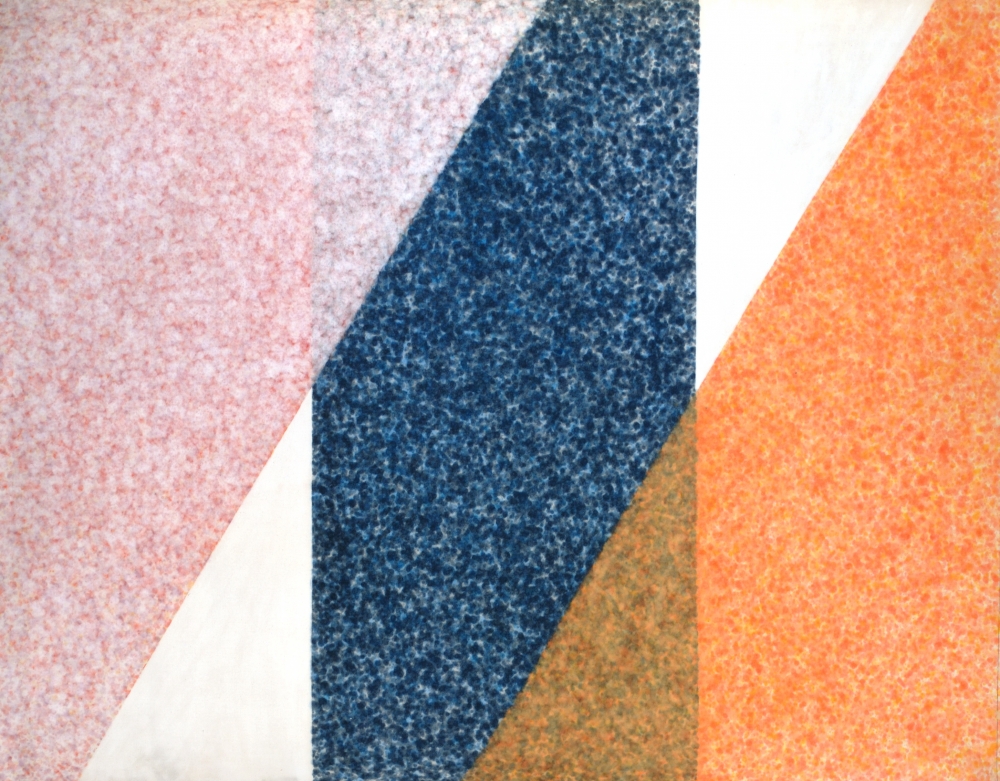 Around 1961 Mehring began a new phase of experimentation leading to the second stage of his mature work wherein he imposed geometric structure on areas of textured color without linear circumscription. With this unprecedented approach Mehring generated a body of work which he called "Broken-Color Constructed" paintings. These exciting advances are apparent in “Untitled (Squares);” “Untitled (Red Circle);” “Untitled (Maroon Circle) and “Untitled (Diagonal)” and “Vertex.”

About this stylistic shift Mehring related, "I began using geometric images expressed through areas of small, fused color dots. I noticed that in my overall paintings...there was a tendency for the picture to heat up around the edge. There was a concentration of energy there, a pause before the eye moved out. What I have done in the new work is to invert that edge, carrying it into the picture almost as if the canvas had been folded back on itself. Symmetrical divisions are then formed. These establish a rhythm or base from which to work." The artist further elaborated, “These variations in color and accent are like variations on a theme in music. In some paintings I use harmonious colors to create a balanced theme; in others, I try for resonance; in still others I try for a dissonant note. I like unexpected effects…like a sudden discord in music. I still keep my stippled surface to make the colors move as a kinetic element in the painting." 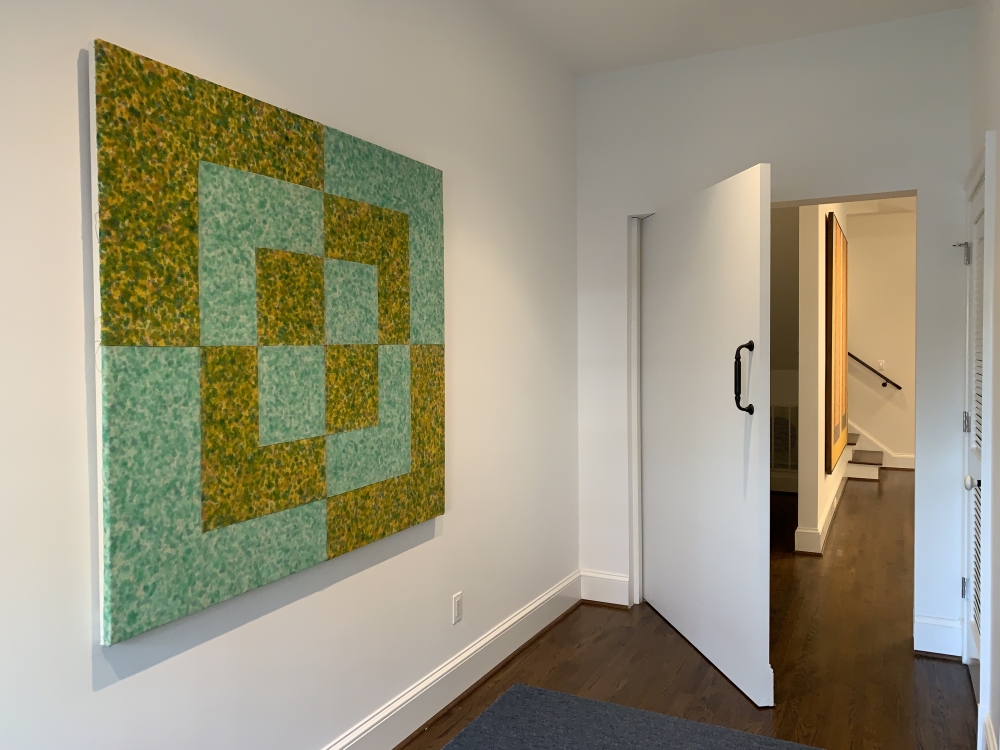 While working with geometric structure, from 1961 to 1963, Mehring discovered an innovative approach to the edge. He explained, "I needed the hard edge to focus with. I found that I couldn't arrive at a clean enough break between the color areas through paint alone. But when I cut the pieces, it gave me the clear, sharp separation I needed. I paint the areas of color first, and then cut them out and try fitting them together until I get the arrangement I want." Mehring asserted that his new method of cutting painted canvas and piecing compositions together allowed him to convey a sense of the painting as an object in-itself, in addition to its status as a representation. This breakthrough allowed him to freely manipulate color to its full potential, as is seen “Untitled (Green Square)” and “Untitled (Red, Black, Green and Gray Square).” 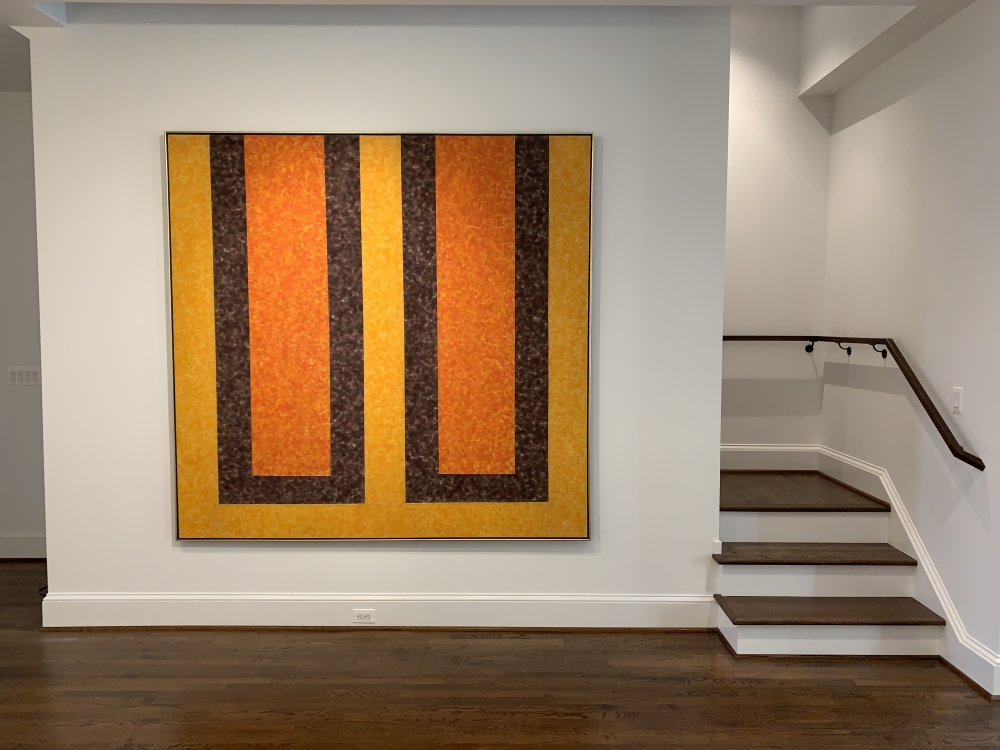 Mehring compared his Allovers to "a single chord" and his Broken Color Constructed paintings to "a full composition, a fugue." He asserted, "I no longer strike just a single chord; now I use composition and counter-point and tonal relations, just as you do in music." He devised geometric compositions by simplifying shapes of letters of the alphabet, including W, T and L, a practice that would inform his work for the rest of his career. "In the works during this period he introduced certain compositional tensions,” observed curator Walter Hopps, “They were symmetrical from left to right, but not from top to bottom." The lateral symmetry of these compositions gives them a commanding stability, whereas their vertical asymmetry creates a dynamic upward thrust. These new works typically contain more tonal contrast than the Allovers, as Mehring tended to ground his compositions with dark colored bands. In the Broke- Color Constructed paintings Mehring fully realized his conception of color imaging as classical abstraction. Balanced and elegantly proportioned, the inverted T and W paintings combine the plush texture of the Allovers with the clarity and tension of geometric compositions, as is seen in “Untitled (Red Black and Yellow T); “Untitled (Blue, Black and Yellow T)” and “Cadmium Double.” 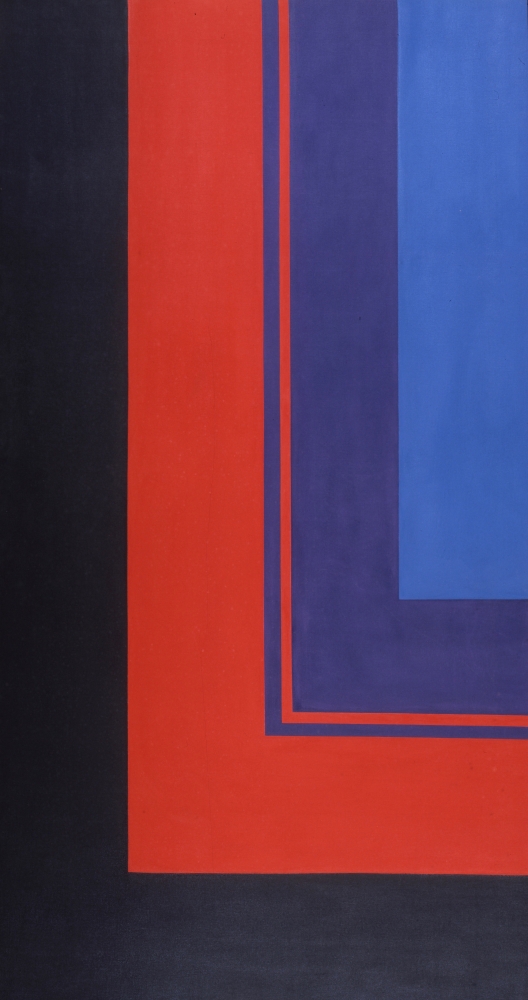 Inspired by his progress, Mehring confidently proclaimed, "My own work has just gone through a very experimental phase. I have hit on a new scope of possibilities." In 1964 the artist initiated a series of paintings based on shapes of letters in which he varied the colors as well as the number and width of bands in his compositions. He discontinued his practice of piecing cut sections of stippled canvas and instead painted solid bands of color on intact, single sheets of canvas. These works constitute the last stage of his practice: the "Hard-Edge" paintings. The self-assurance of Mehring’s Hard-Edge style is unmistakable in the rare L-shaped “Untitled (Red, Blue and Black L).”

magna and metallic paint on canvas